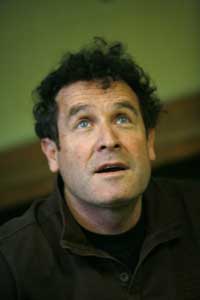 Johnny Clegg is one of South Africa’s most celebrated sons. He is a singer, a songwriter, a dancer, anthropologist and a musical activist whose infectious crossover music, a vibrant blend of Western pop and African Zulu rhythms, has exploded onto the international scene and broken through all the barriers in his own country. In France, where he enjoys a massive following, he is fondly called Le Zulu Blanc – the white Zulu.

Over three decades, Johnny Clegg has sold over five million albums of his brand of crossover music worldwide. He has wowed vast audiences with his audacious live shows and won a number of national and international awards for his music and for his outspoken views on apartheid, his perspectives on migrant workers in South Africa and the general situation in the world today. Johnny Clegg’s history is as bold, colourful and dashing as the rainbow country which he has called home for more than 40 years.

Born in Bacup, near Rochdale, England, in 1953, to an English father and Zimbabwean mother, he was brought up in his mother’s native land of Zimbabwe. She married a South African journalist and immigrated to South Africa when Johnny was seven years old. At the age of nine, he spent two years in Zambia with his parents who then returned to South Africa when he was 11 years old. Between his mother (a cabaret and jazz singer) and his step-father (a crime reporter) who took him into the townships at an early age, Johnny was exposed to a broader cultural perspective than that available to his peers.

Whilst lecturing Anthropology at the University of the Witwatersrand in Johannesburg, Clegg worked on the concept of blending English lyrics and Western melodies with Zulu musical structures. This blend was recognised by a South African producer, Hilton Rosenthal, who became the champion of the project and drove it with passion and commitment. He signed up Johnny and Sipho Mchunu (his songwriting and performance partner at the time) to his independent label at a time when mixing music was effectively unprofitable because of the radio censorship of mixed music and mixed bands.

Hilton went on to produce all of Juluka’s albums as well as all of Savuka’s albums. He continues to promote all their work today as their publisher. Johnny and Sipho called their new band JULUKA which means “sweat” in Zulu. Their music was subjected to censorship and internal restrictions on the state-owned radio and their only way to access an audience was through touring. This brought them into conflict with Group Areas Act which enforced the geographical separation of race groups and their cultural facilities.

At this time they could only play in private venues as the law forbade mixed race performances in public venues and spaces. Testing the law, they played at universities, church halls, migrant labour hostels and even in the lounges of private houses. The battle ground of public versus private performances was often challenged by the security police who attempted to close these down whenever they could. Many shows were closed down but not enough to prevent the emergence of a substantial following of students and migrant workers.

In late 1979 their first album, Universal Men, was released. The album was a musical journey into the life of the Zulu migrant worker, living and working in the city, but continually journeying home, caught between two different worlds.

A second album, African Litany, came out two years later and was greeted with critical acclaim. Juluka worked hard to maintain the basic framework of their music on this album, but allowed themselves the freedom to explore broader aspects of the South African experience.

This ground-breaking work was largely ignored by the SABC (South African Broadcasting Corporation) because of the mixing of languages and also the combining of African and Western musical forms. However it developed a following through word of mouth and sold-out live shows.

An immediate follow-up album, Ubuhle Bemvelo, was released. Recorded entirely in the Zulu language, it continued to mix Western and African styles of music and appealed to a niche market. Juluka were most fruitful during 1982 and 1983 with tours of the USA, Canada, Germany and Scandinavia. In 1983 they released Work for All and a year later they came out with Musa Ukungilandela. In the six years that they were initially together, the band recorded two platinum and five gold albums and became an international success.

Juluka split up in 1985. Mchunu returned to his roots, which was cattle farming in Zululand, while Clegg formed another crossover band, SAVUKA (which means “we have risen”). This time around his concept was to mix African music with a wider music base and international rock sounds. The first album with Savuka was Third World Child, in 1987, and broke all international sales records in France, Switzerland and Belgium in 1988. This was followed by Shadow Man (1988), Cruel, Crazy Beautiful World (1989) and Heat, Dust & Dreams (1993) and then the best of Johnny Clegg and Suvuka with the release of In My African Dream (1994). Savuka toured extensively in Europe and north America from 1988 to 1993, breaking all attendance records in France in 1988 and 1989.

Savuka was terminated in 1993 and three years later Clegg and his lifelong friend Mchunu temporarily re-formed Juluka and recorded Ya Vuka Inkunzi (also released as Crocodile Love). Since then, Johnny has recorded several solo projects including his latest album One Life (2007), New World Survivor in 2002 and his close-to-the-heart projects, A South African Story (2003) involving an album and live concerts, have again proved resounding successes. 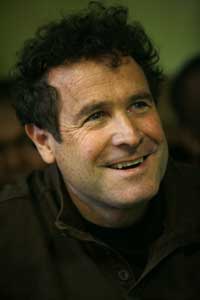 In the period between 2005 and 2008, Johnny has featured at several major European festivals, notably Live at Sunset, Zurich 2005, Fête de l’humanité 2007 in Paris, France; Musique Métisses 2006 at Angouleme (France’s premier World Music festival), Bal à la Bastille 2007 (open air for 100,000 people at the Place de la Bastille in Paris – televised live by over seventy TV stations), Quebec Summer festival 2006 (Festival d’eté de Québec) and concurrently completed his own annual European tours and in 2005 completed a 30-date coast-to-coast tour of the continental US and Canada and a sell-out tour of Australia and New Zealand. He has also performed annual runs in major South African centres for capacity audiences.

Johnny Clegg has performed on all four of Nelson Mandela’s 46664 Aids Awareness Concerts in South Africa and in Norway. Mandela has joined him on stage during the rendition of Asimbonanga, a song written by Johnny about Mandela (and other struggle heroes) during his period of incarceration. At every live performance of this song, the audience, charged with emotion, spontaneously rises to their feet. During the Cape Town and Tromso 46664 shows, Johnny also performed duets of his work with Peter Gabriel.

Johnny’s haunting refrain Impi (meaning “Zulu warriors” or "War") regularly echoes within any South African Rugby stadium which, together with his song Great Heart from the movie Jock of The Bushveld and The Crossing (written for Dudu Ndlovu, his Zulu dance partner in the Savuka era), has achieved anthem status with crowds in his home country. Other notable hits penned by Johnny Clegg include, amongst others, I Call Your Name, Scatterlings of Africa, African Sky Blue, Take My Heart Away, African Shadow Man, December African Rain, Kilimanjaro, Fever and many more.