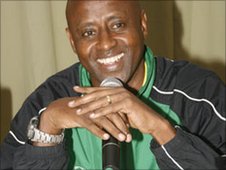 The head of Rwanda's Football Federation, Brig-Gen Jean Bosco Kazura, has been arrested for travelling to the World Cup in South Africa.

An army spokesperson said as he was also a soldier, the football official needed permission to leave the country.

He was recalled and detained for "insubordination", spokesman Jill Rutaremara told the BBC.

He denied it was to do with the general contacting two senior officers who recently fled to South Africa.

They left Rwanda earlier this year after falling out with President Paul Kagame, who later reshuffled the military leadership ahead of elections due in August.

"Even though he serves in the private sector with the football federation, he still has to obey military law," Lt-Col Rutaremara told the BBC's Great Lakes service.

Brig-Gen Kazura was put in charge of training and operations after the reshuffle.

Before joining the football federation, he had served with Rwandan peacekeepers in Sudan's troubled Darfur region.

He was also involved in the military campaign conducted by the Rwandan Patriotic Front (RPF) to end the 1994 genocide, as were two other top-ranking officers arrested in April.

August's elections will be the second presidential polls held since the genocide when Mr Kagame, the RPF leader, came to power.

The World Cup kicks off in South Africa later on Friday - the first time it being held in Africa.