Victoire Ingabire Umuhoza is the leading presidential candidate challenging Rwandan President Paul Kagame – if he allows her to run.

Rwandan police have arrested Peter Erlinder, the American lawyer who traveled to Rwanda’s capital, Kigali, on Monday, May 23, to join the defense team of Rwandan presidential candidate Victoire Ingabire Umuhoza. (Scroll down to watch the video interview recorded by Olivier Nyirubugara on May 23 at the end of this post.)

Ingabire was released after being summoned to a Rwandan police station yesterday, much to the relief of her supporters, but this morning both she and the Rwanda News Agency (RNA) reported that Erlinder had been arrested and charged with “genocide ideology,” a crime unique to Rwanda which Human Rights Watch, Amnesty International and even the U.S. State Department have denounced as a tool of political repression.

Erlinder, a prominent critic of Rwandan President Paul Kagame’s regime and of the received history of the Rwanda Genocide, had traveled to Kigali after attending the Second International Criminal Defense Lawyers’ Conference in Brussels.

State run Rwandan media have attacked Erlinder since his arrival and the Rwandan News Agency reports that he is now in custody and being interrogated at the Rwandan Police Force’s Kacyiru headquarters.

The RNA also reports that the American embassy in Kigali has taken up the matter, but it is not yet clear in what form. The embassy is located just meters away from the police headquarters.

Before leaving for Brussels and then Kigali, Erlinder notified the U.S. State Department, his Minnesota Congressional Rep. Betty McCollum and his friend in the neighboring district, Rep. Keith Ellison, and Minnesota Sens. Al Franken and Amy Klobuchar.

Erlinder bases his critique of the Kagame regime and the received history of the 1994 Rwanda Genocide on the evidence collected in his Rwanda Documents Project. 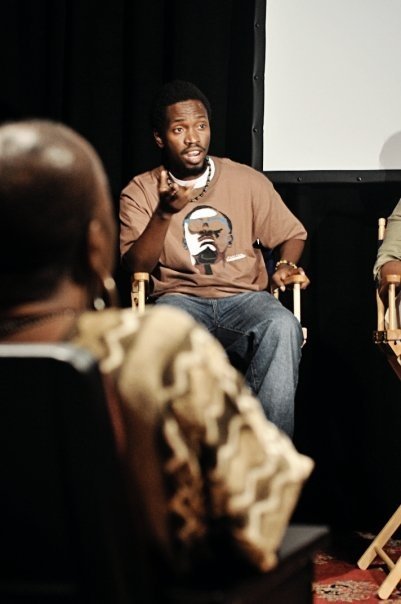 Kambale Musavuli, spokesperson and student coordinator for Friends of the Congo, breaks the silence at the Congo in Harlem Film Festival. His T-shirt, designed by Congolese artist Shako Oteka, depicts assassinated Congolese President Patrice Lumumba. – Photo: Shako Oteka
This is a call script to use – or compose your own – when calling in support of Professor Erlinder’s release from jail in Kigali:

I am calling as a concerned [citizen/student/constituent] to inform you that an American lawyer, Professor Peter Erlinder, was arrested in Rwanda while there to defend a pro-democracy opposition leader currently on trial. In recent months, opposition party candidates have been intimidated, physically attacked and arrested. Some were denied proper due process, and Professor Peter Erlinder was there to aid Victoire Ingabire Umuhoza in this regard.

I am calling therefore to ask that you take the necessary steps to secure his immediate release and demand that Rwanda allow him to continue his human rights work. Both Human Rights Watch and Amnesty International have reported on Rwanda’s ongoing gross disregard for human rights. Obstructing free and fair trials for the accused as in this case is a prime example such violations.

Members of the House Committee on Foreign Affairs:

For anyone not familiar with Prof Erlinder, he is amongst the three lawyers taking Kagame to court here for the crimes he has committed in the region as well as the theft of Congo’s minerals.

For an official copy of the case – Kagame is being sued on eight counts; Count 6 is for looting Congo’s minerals – visit http://www.kambale.com/pdf/kagame_lawsuit_april29th_2010.pdf.

Kambale Musavuli is spokesperson and student coordinator for Friends of the Congo. He can be reached at Kambale@friendsofthecongo.org.