Login + Create my blog
Rwanda Pursues Dissenters and the Homeless 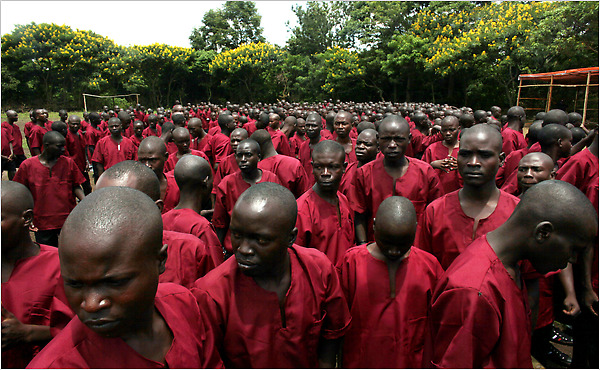 Hundreds of young adults and minors arrested for petty crimes ranging from being homeless to not having an identification card awaited the arrival of a government minister to Iwawa Island. More Photos »

IWAWA ISLAND, Rwanda — A few months ago, Gasigwa Gakunzi was hanging around a ramshackle house where poor children pay to watch television when the Rwandan police arrested him for loitering. The next thing he knew, he said, he was taken away from his family and carted off to this remote island in the middle of Lake Kivu.

Slide Show
An Island of the Unwanted
Related
Gasigwa, 14, now spends his days learning patriotic songs and how to march like a soldier. At night, he sleeps in a huge sheet-metal shed with hundreds of men and boys packed mattress to mattress.

“Please call my father,” he whispered. “He has no idea where I am.” Nearly 900 beggars, homeless people and suspected petty thieves, including dozens of children, have recently been rounded up from the nation’s neatly swept streets and sent — without trial or a court appearance — to this little-known outpost. They will spend up to three years here being “rehabilitated,” learning skills like bricklaying, hairdressing and motorcycle maintenance.

It is one of the country’s newest self-improvement projects, and it seems a fitting symbol for what many political analysts and human rights groups say Rwanda has become: orderly but repressive.

Under President Paul Kagame, this country, which exploded in ethnic bloodshed 16 years ago, is now one of the safest, cleanest and least corrupt nations on the continent. The capital, Kigali, is not ringed by sprawling slums, and carjackings — a deadly problem in many African cities — are virtually unheard of here. The roads are smoothly paved; there is national health insurance; neighborhoods hold monthly cleanups; the computer network is among the best in the region; and the public fountains are full of water, not weeds. All of this has been accomplished in one of the world’s poorest countries.

But while the nation continues to be praised as a darling of the foreign aid world and something of a central African utopia, it is increasingly intolerant of political dissent, or sometimes even dialogue, and bubbling with bottled-up tensions. Recent grenade attacks in Kigali and a shake-up in the army showed that even one of the cornerstones of the new Rwandan state — personal security — might be in danger.

“Kagame’s strategy for stability is a dangerous, long-term gamble,” said Kenneth Roth, executive director of Human Rights Watch. “By stymieing a political opposition, an independent press or a critical civil society — in short, by not allowing democratic institutions to form — Kagame is leaving people little to identify with but their ethnic group.”

With less than four months to go before national elections, few of the major opposition parties have been allowed to register. Some opposition supporters have been attacked inside government offices; others have been jailed. Several prominent government officials who recently broke ranks with Mr. Kagame defected to other African nations, saying they feared for their lives. The BBC local-language radio service was shut down for a time because the Rwandan government did not like the way it was talking about the genocide of 1994.

That dark period, when death squads from the Hutu majority massacred hundreds of thousands of minority Tutsis, as well as moderate Hutus, remains the touchiest subject of all. In the past three years, Rwandan officials have prosecuted more than 2,000 people, including political rivals, teachers and students, for espousing “genocide ideology” or “divisionism.”

Mr. Kagame and his disciplined military quickly restored order after the genocide, and this stability has been the foundation for Rwanda’s remarkable comeback. The foreign minister, Louise Mushikiwabo, says that after all Rwanda has been through, the government has to remain vigilant about ethnic divisions.

“Rwanda will not allow any politician, political party, any individual, to tamper with the reconciliation and unity in Rwanda,” she said in an interview.

Instigators of violence have been prosecuted for divisionism, but so have people trying to discuss the country’s past or its current direction. Critics contend that the government wields Orwellian-sounding laws that are intentionally vague to stifle any inkling of opposition.

Even programs like the one on Iwawa Island, which the government says will give street people a second chance, are not exactly what they seem.

As a boatload of officials recently glided onto shore, one police commissioner gestured to the birds, the trees and the young men with uniformly shaved heads fetching water and said, “Welcome to our Hawaii.”

But on the mainland, people describe it as an Alcatraz.

“We call it the island of no return,” said Esperance Uwizeyimana, a homeless mother of four.

None of the vocational training programs had started by mid-March. Protais Mitali, the youth minister, insisted there were no street children here, just adults. Yet squeezed in with the men were many adolescents like Gasigwa, and employees confided that several dozen boys were incarcerated here.

“This isn’t a good place for children,” one employee said in hushed tones because the minister was nearby. “They could get abused.”

Rwandan officials are prickly about complaints. President Kagame lashed out at foreign critics this month, saying, “Who should be giving lessons to Rwanda’s 11 million people about what is good for them?”

He called opposition leaders “hooligans” and said Rwandans were “as free, as happy, as proud of themselves, as they have never been in their lives.”

Several leading opposition figures, like Victoire Ingabire, say it is impossible to challenge the government, arguing that it is controlled by a cabal of Tutsis who were refugees in Uganda before the genocide and now unfairly dominate the economy.

Mrs. Ingabire, a Hutu, was an accountant living in the Netherlands until she returned in January to run for president. Today, she lives in a new housing development called Vision 2020 Estate; her sturdy, two-story brick town house is indistinguishable from dozens of others, except for the guards out front.

“There’s no space to talk about what happened in our country,” said Mrs. Ingabire, who has been charged with genocide ideology, being a “divisionist” and collaborating with rebels. It is not just Hutu politicians who feel persecuted. Charles Kabanda used to be a leader of the Rwandan Patriotic Front, the Tutsi-dominated ruling party, but split with it in the late 1990s, he said, because “they were ruthless.”

He recently worked with the Green Party, but said it had been repeatedly blocked from competing in the elections. Government officials said the Green Party failed to meet requirements like getting 200 valid signatures from all over Rwanda. Mr. Kabanda simply shook his head.

“ ‘Enemy, enemy, enemy’ — that’s what they call anyone who thinks differently,” he said. “This government’s record is dreadful. It’s only you, the international community, who is showering them with flowering praise.”