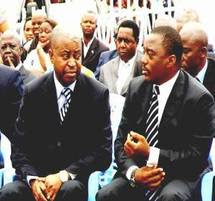 No more suspense. The President of the Republic is to overhaul the government and his cabinet. First observation: maintaining Adolphe Muzito as Prime Minister. Second observation: the reduction of ministerial posts. 54 members, the Executive is now composed of 43 ministers and deputy ministers. Government austerity. Third observation: mission under the banner of social and preparation of elections. Great challenges lie ahead.

Congo-DRC: Finally the new government Muzito
Besides the Government, the Head of State has also reshuffled his cabinet by appointing a new Chief of Staff and a Special Advisor on Security. - Willingness to give new impetus to government action.

The wait seemed long. Whereas since June 2009, the government reshuffle comes late to intervene. After the order made public last Friday evening, the President of the Republic proceeded to reshuffle the government. A reading of the composition of this team, we see that the President of the Republic has renewed its confidence in Prime Minister who has been reappointed. But also François Joseph Mobutu Nzanga as Prime Minister, Minister for Employment, Labor and Welfare. Continuing to prove that the coalition-AMP-PALU UDEMO is doing well and there was more fear than harm. Quit to take into account all relevant comments to continue to govern together.

However, we see significant outflows were recorded. These are precisely the former deputy prime ministers and Bongeli Mutombo Bakafwa Nsenda. But also that of Matenda, former Finance Minister Lokoka, Minister of Budget. The former finance minister was replaced by Matata Ponyo, former Director General of BCECO working closely with the IMF and World Bank. As for Pierre Lumbi former Minister for Infrastructure, Public Works and Reconstruction, he was called to other duties as Special Adviser to the Head of State Security.

Another feature to note, the size of government. 54 members, the Executive now has 43 members. This reduction in the size of Government by the amalgamation of certain portfolios and county has a goal to make more compact the government team for more efficiency, lower the standard of living of the State to achieve the completion point and stabilization of macro-economic framework. This is a government austerity and that all departments will do the same to reduce the number of advisers overcrowded ..

Its tasks are to consolidate the achievements of the Government in this mission for peace, restoration and the affirmation of the authority of el 'state and the opening diplomatic to continue the program of national reconstruction and the achievement of 5 yards of the Republic by the acceleration of economic growth, improve social populations thanks to measures to improve business climate, the application of the policy of "zero tolerance" and the benefits of achieving completion point and in stabilizing the macroeconomic framework, and finally to the organization of elections. These are major challenges.

In the same vein, the President of the Republic proceeded to reshuffle his cabinet. Pierre Lumbi Okongo was appointed Special Adviser on Security and G. Beya, new Chief of Staff.

Below the entire ordinance appointing members of the Government ..

Order No. 10 / of appointing vice-premiers, ministers and deputy ministers

The President of the Republic,

Given the Constitution, especially Articles 78, 79 and 90;

Revised Ordinance No. 08/067 of October 26, 2008 appointing the Vice-Prime Ministers, Ministers and Deputy Ministers;

On the proposal of the Prime Minister;

Ministers are appointed to office next to their names, the following persons:

Are appointed Vice-Ministers to functions next to their names, the following persons:

Are repealed all previous provisions contrary to this Ordinance.

The Prime Minister is responsible for the enforcement of this Ordinance comes into force on the date of signature. a with DRC Katanga Governor Moses Katumbi at the Umutomboko ceremony in Mwansabombwe.

DEMOCRATIC Republic of Congo (DRC) Katanga Province Governor Moses Katumbi has described as cheap politicking allegations that he travelled to Mwansabombwe in Luapula Province to drum up support for President Banda.

Mr Katumbi told journalists in Ndola yesterday that he was a foreign national who cannot influence internal political matters of Zambia.

“To say that I went to Luapula Province to give support to the President (Banda) is cheap politics,” Mr Katumbi said.

He said DRC and Zambia share the longest border which stretches from Chililabombwe on the Copperbelt Province to Mununga in Luapula Province and his visits to Zambia are on mutual relations.

“So every time I come to Zambia, it is because of the mutual understanding between the two governments. I cannot have any influence over politics in Zambia because I am Congolese just like no Zambian can influence anything in the Congo,” Mr Katumbi said.

On his impromptu visit to Zambia, Mr Katumbi said he was in the country on the continued development understanding which exists between the two countries, especially the Copperbelt and Katanga provinces, respectively.

He said the bilateral relationship between Zambia and DRC will continue to benefit the people in the two countries through projects such as the tarring of the Pedicle Road which links the Copperbelt and Luapula provinces through the enclave of the DR Congo.
“We want to improve the Kasumbalesa border post,” he said.

Mr Katumbi, who was accompanied by Copperbelt Province permanent secretary Villie Lombanya and officers from the DRC consular office in Ndola, also held a meeting with officials from Gecamines at Bangala House before returning to Katanga Province.
Gecamines is a DR Congo-owned mine in Katanga province.

Earlier, Mr Lombanya said Zambia and DRC have for a long time enjoyed the bilateral and cordial relationship which exists between the two countries.