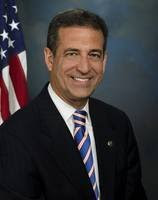 July 15, 2009
Washington: The International Crisis Group threw in the proposal last week, now a senior United States Senator has written to the Obama administration demanding that it encourages government in Kigali to have “”direct” talks with some FDLR rebels, RNA reports.
“The international community should urge Kigali to open direct negotiations with non-genocidaire combatants of the FDLR to encourage their repatriation”, said to Senator Russ Feingold, Chairman of the Senate Foreign Relations Subcommittee on African Affairs.
In a letter to Secretary of State Hillary Clinton, he also backs calls for an end to ongoing military operations to forcefully disarm the rebels – some of who are accused of taking part in the Tutsis massacres in Rwanda.
“It is critical to augment non-military initiatives to induce defections and open channels of dialogue between the warring parties”, says the Senator, a major voice in American foreign policy on Africa.
On March 31, 2005, the FDLR exiled political hierarchy met in Italy and released a declaration condemning the 1994 Genocide and agreeing to voluntary disarmament. In return, they demanded for talks with government. However, even just the mere mention of it in Kigali rouses bitter rebuttals.
Rwanda refuses political talks with the rebel group as a whole, but it is willing to welcome combatants on an individual basis. The initiative has seen up to 8000 combatants surrendering, according to the UN mission in Congo. Government maintains it has no business talking to criminals.
In a five-point proposal, Senator Feingold wants the Obama administration to develop a long-term policy to address the conflict in the troubled eastern region of the DRC which has left thousands of civilians at the mercy of rampaging militias - often as government and the UN look on helplessly.
The lucrative, but largely underground trade in minerals that the FDLR have depended on must be closed. The Senator says the U.S should work with governments in the region as well as end-user companies under their jurisdiction to establish a framework to bring greater transparency and regulation to the industry.
Related Materials:
Congo: A Comprehensive Strategy to Disarm the FDLR

“[Rwandan] Government maintains it has no business talking to criminals”.

“Had the US “impunity policy” not been in place, Kagame might well have been prosecuted along with Military-1 defendants Bagosora and Nsengiumva, as ICTR Prosecutor Michael Hourigan recommended in early 1997. Kagame’s responsibility for the assassination of Habyarimana has been known to the ICTR Prosecutor since at least that time, if not early” (excerpt from Rwanda: No Conspiracy, No Genocide Planning ... No Genocide? By Peter Erlinder, December 24, 2008).

Yes you read good books like me.I always agree that whatever happened in Rwanda in 1994 it is becoz Kagame carelessly sacrificed Rwandans especially Tutsis just to follow his own criminal soul of blood thirsty attitude.He should face justice.it doesnt matter how long it takes even Tailor is behind the bars soon or later Kagame will join him there.the issue of genocide should be asked Kagame who waged the war against a sovereign country and killed two Presidents.if the USA is really a democratic country why do they continue shielding a murderer like Kagame?